In this special week, we will talk about the underdogs of the savannah: the hyena. You might have learned about them before as the sneaky scavengers that laugh and tease other animals. Perhaps you saw how ugly they looked in The Lion King. Here are some facts about hyenas that might clear up some misconceptions about them. They are not wild dogs

This might come as a surprise because they have a snout and pointy ears that resemble a German Shepherds’. In fact, taxonomically speaking, they are more related to cats – although they don’t belong to the feline family. They are closely related to the mongoose, meerkats, and other cat-like mammals.

There are three species of hyenas

Those with keen eyes might see the difference between the spotted hyena, the brown hyena and the striped hyena. The spotted hyena is the largest species among them, with a black spotty fur pattern on brown fur. Brown hyenas rank second in size, having longer, more shaggy hair with lighter fur around the neck and a short bushy tail. The striped hyena has long white or grey hair, with stripes along its body and head.

At Bali Safari Park, you can find the striped hyenas, with the typical ‘mane’ along the ridge of their spine.

In the movie Lion King, you might notice that Shenzi, the female spotted hyena, appears to be the leader as she is smarter than Banzai and Ed, the only male spotted hyenas in the group. This is also true in the wild.

In general, female spotted hyenas are bigger and stronger than the male hyenas, and are typically more aggressive. This means they dominate the clan and rank higher than male hyenas.

To rank highly means to gain access to food first and to be able to choose which animal to mate with. Conversely, in a clan of brown and striped hyenas, the males are more dominant, and the clans are led by alpha males.

However, in all species, mothers in a clan collectively nurse and protect the clan’s cubs. Other members usually cooperate to bring food to the den for the cubs.

Hyenas mate with members of other clans

Each clan can have a record of up to 80 members, but despite this sheer number of male and female hyenas, during the mating season, hyenas typically mate with members of other clans.

Biologically, this protects the genetic pool, because many members of the same clan are biologically related to one another.

Hyenas are not just scavengers; they can also hunt pretty well 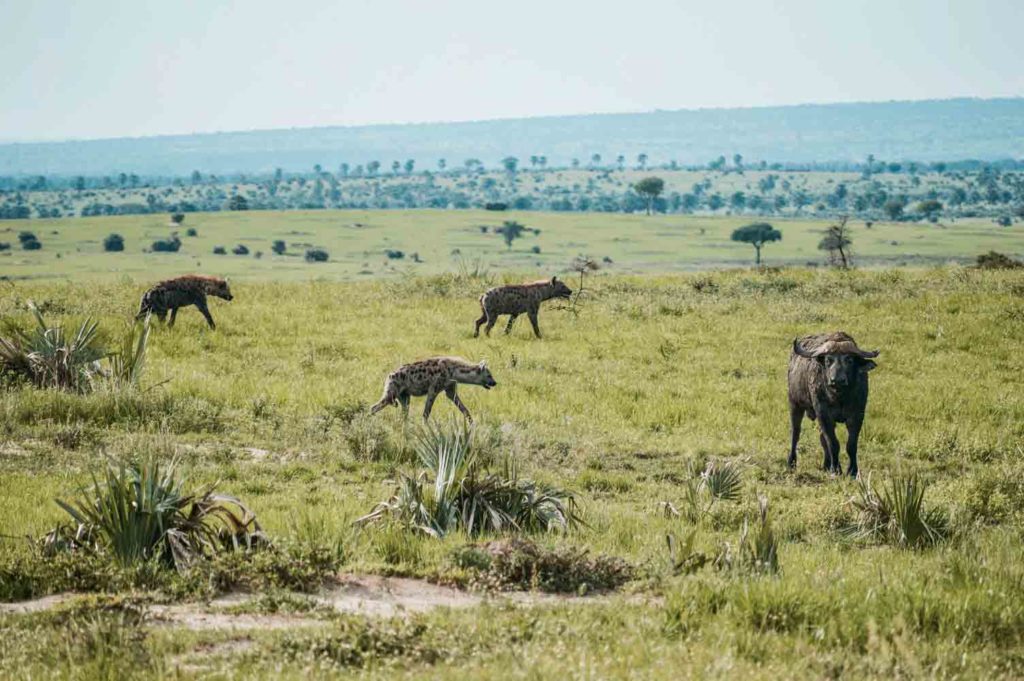 They might be commonly known for scavenging or even stealing other carnivores’ hard-earned kill for easy meals, but this is not entirely true. In fact, recent studies found that it’s actually lions who steal more kills from spotted hyenas, rather than the other way around.

Hyenas have clearly gained a bad, and rather unfair, reputation for being sneaky scavengers. It’s been reported that hyenas are more than capable of hunting down wildebeest, porcupines, snakes and hippos! These are very difficult animals to hunt, even for lions!

Hyenas are more intelligent than you think

An animal behavioral psychologist, Benson-Amram, created what is dubbed as the world’s first carnivore intelligence test. It consists of a metal puzzle box with a food reward inside.

She tested various predators, from polar bears to lions. She theorised that carnivores with a high level of social intelligence are able to solve the puzzle quicker.

How does the hyena perform? Unsurprisingly, very well. Not only can they solve the puzzle quickly, the fact also supports Benson-Amram’s theory that hyenas – having a strict social hierarchy and are able to hunt effectively in a pack to take down difficult prey – have superior social intelligence.

Now that you know more about hyenas, you should definitely check them out at Bali Safari Park. Get close up to the curious striped hyenas in their enclosure!