Orangutan, The Man of Forest

Did you know that the Orangutan shares 94% of humans’ genes? These adorable mammals are highly intelligent and also critically endangered.

You can find Orangutans in the lowland forests of both Borneo and Sumatra, although their population is now dwindling at an alarming rate, due to poaching and loss of habitat, mainly the result of human encroachment and development.

Man of the Forest

The word Orangutan means “Man of the Forest” in the Indonesian language but unlike men, these beautiful creatures live a solitary existence in nests high up in trees to rest in and sleep at night. They eat fruits such as mangosteen, lychee and fig.

They are what you may call “frugivores”. Although their diet also consists of a mix of young leaves, flowers, barks, honey and some insects. They drink water from holes in trees. You might be surprised to know that one of the Orangutan’s favorite fruit is the Durian, perhaps due to its strong smell and taste. 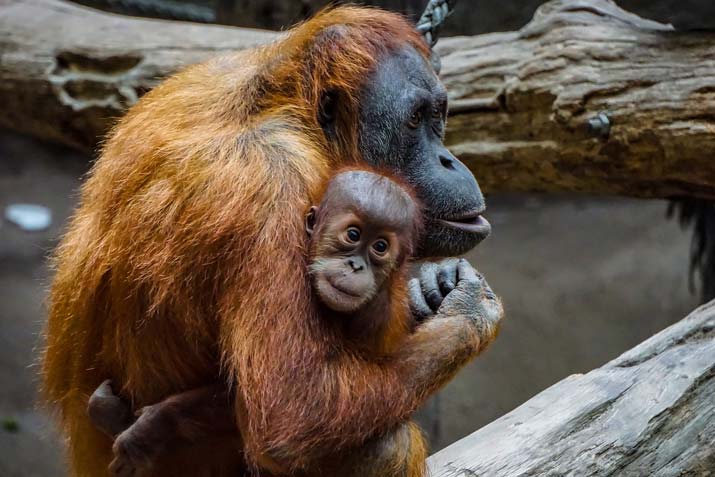 The Orangutan has long, powerful arms and legs that allow them to move deftly from tree to tree. Both the Sumatran and Borneo possess similar physical traits, although the Sumatran one has longer facial hair. They can travel anywhere from 50 metres to 1000 metres in a day and can live from anywhere between 35 to 45 years.

The Borneo can weigh from 50kg to 100kg, and the Sumatran can weigh up to 45kg.  The Orangutans with the cheek flaps are male. These are called flanges. They also have a throat sac used to make deep, long calls.  In 2017, the third species of Orangutan only have 800 individuals.

The Tapanuli Orangutan is critically endangered. While the Borneo Orangutan is estimated 104,000. And the Sumatran Orangutan 7,400 individuals.